To this extent, we have produced this basic guide about noise to help understand the noise information on the product labelling so our products can be used safely and to their fullest extent.

What is noise or sound?

Soundwaves can be likened to the ripples made when you drop a pebble into a still pond. Except in the case of soundwaves, the pebbles are actions like a balloon popping and the pond is the air. When you drop a big stone into a pond the ripples will be bigger than if you drop a small pebble into the pond, the same is with soundwaves, bomb going off will make big ripples in the air compared to an EG67 going off where the ripples will be smaller and we hear a much smaller noise compared to the bomb.

The number of wavelengths within a period of time is called the frequency.

This guide will use the transverse wave (above picture) as a pictorial explanation; however, sound waves are in actually longitudinal waves which act a bit like a Slinky with areas of high pressure and low pressure along the wave (Slinky).

Sound is measured using a sound meter placed at a measured distance from the sound (this is important). The sound meter is set to measure using a range of filters denoted by the letters A, C and Z. Each filter “sifts” the sound wave only allowing through certain parts of the sound wave. Filter “A” mimics the human ear so the sound that is measured is close to what the human ear will hear filtering out very high and very low frequency sounds. Filter “C” attenuates the sound wave less than “A” and is commonly used for very high pressure (loud) sounds or sounds with a very low frequency or bass element. Filter “Z” doesn’t filter the curve and is the measurement of the raw sound wave.

Sound is measured in decibels (dB) and to identify which filter has been used to measure a sound the filter letter is put in brackets after the letters “dB”.

To accurately measure or record these sounds and noises, the way they are measured is different.

Think of the situation your standing next to a runway and a plane takes off, the noise will be very loud. You’re now standing in your garden watching a plane fly over showing the white trails, the noise of the plane will be much lower. This is an extreme example and you’ll probably be thinking “well that’s obvious” but it highlights that distance matters.

If we compare two different products that produce a noise:

If you are standing 5 metres from both devices, then device B will sound much louder than device A.

Therefore, when quoting the sound level a device produces, the distance that a sound measurement was recorded at should always be stated, otherwise the measurement is meaningless.

So that someone can clearly understand a noise measurement all of the following information needs to be stated.

If a sound measurement is quoted without this information, it is meaningless.

Sound Inside and Outside

Popping a balloon outside in the garden will be a lot quieter than popping the balloon inside the house which will sound much louder.

When a sound is created outside the noise energy is projected in all directions so when the sound wave reaches you, you are only hearing a small part of total sound energy that was produced.

If a device is used in a confined space e.g. an alley way, where it is essentially outside but enclosed  in some directions (e.g. walls on 2 sides of the area); then the noise produced by a device will sound louder than if it were in an open space but lower than if it were inside (totally enclosed).

How do we Hear Sound? 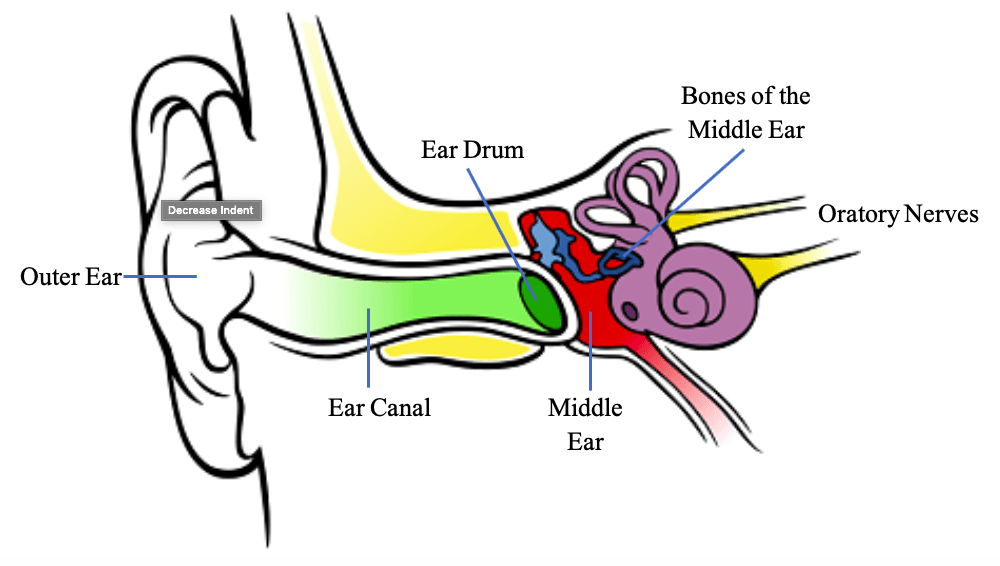 Sound waves are collected by the outer ear and funnelled through the ear canal toward the ear drum. The sound waves cause the ear drum to vibrate which in turn vibrates the small bones in the inner ear.  These bones transmit and amplify the vibrations through the fluid in the middle ear. The middle ear fluid stimulates small nerve cells called hair cells which send electrical impulses along the oratory nerve to the brain. We perceive these electrical signals as sound.

There are many ways in which we can suffer reduced hearing. Blockages in the ear canal, holes in the ear drum (burst ear drum), excess fluid in the middle, thickening of the middle ear fluid can all affect the how sounds are transmitted through the ear to the oratory nerve and brain, resulting in a reduced sense of hearing.

Very loud noises or exposure to repeated loud noises without the use of hearing protection can damage the hair cells leading to tinnitus (constant ringing in the ears), and in some cases significant damage to the hair cells that can lead to hearing loss. The tiny hair cells cannot repair themselves or re-grow, so once damaged they cannot recover.

If the sound reaching your ears is above a daily or weekly average of 85 dB(A) based on an 8hr day or 135 dB(A) instantaneous sound, then hearing protection must be supplied and worn.

If the sound reaching your ears is above a daily or weekly average of 87 dB(A) based on an 8hr day or 137 dB(A) instantaneous sound, the hair cells in your ear can be permanently damaged and thus hearing can be permanently impaired.

All Enola Gaye / EG pyrotechnics that produce a bang or other loud noise reports are thoroughly tested when designed and then regularly though the entire manufacturing process. The noise levels are measured outside on a flat concrete surface so that the maximum noise level is recorded.

Because the noise testing is carried out outside, we state that the products must be used outside in order to protect the users and their fellow players or training colleagues.

Following the guidance on the product labels and the advice given on the product safety sheets will ensure that Enola Gaye / EG noise products can be both fun to use and safe.